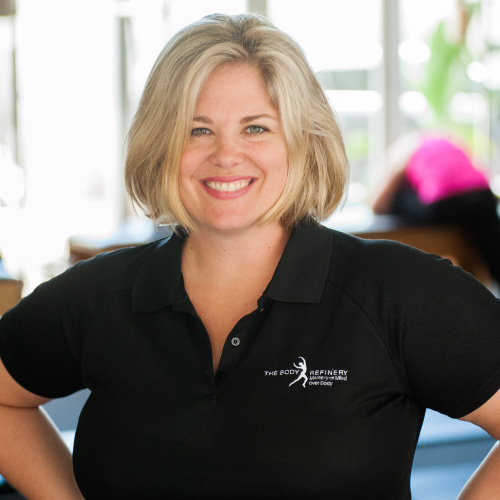 Susan has combined her skills in physiotherapy with her love of Pilates to teach the importance of movement. She operated her own massage business while completing a degree in physiotherapy and then worked as a physiotherapist at Sydney’s St Vincent’s Hospital before she moved to private practice in Brisbane in 2006. Susan also holds a degree in Biomedical Science from the University of Wollongong.

After suffering on-going neck pain, Susan found Pilates as a way to rehabilitate her neck, it worked so well decided as a physiotherapist Pilates would benefit many of her patients and started to train as a teacher in 2005, after trialling a few courses she finally found Polestar Pilates and commenced training with them in 2007 in their first course in Brisbane.

Susan was attending The Pilates Studio New Farm as a client when she bought the business in July 2007.  In early 2009, she renamed the studio The Body Refinery, offering a full suite of services including physiotherapy, Pilates and remedial massage.  In 2019, Susan added Myotherapy, Exercise Physiology and Osteopathy to the suite of services.

A passion for movement motivated Susan on taking further training in GYROTONIC®, Running, Parkinson’s disease and Women’s health and more.

Along with her passion for movement, Susan has developed her business to become well known and highly successful.  The Body Refinery has an exceptional reputation for its customer service and client care. In 2015 out of the desire to make the highest quality Pilates accessible to all and promote healthy movement and optimal health, Susan developed The Body Refinery Online. This extension of The Body Refinery, allows everyone to get access to a wide range of online Pilates classes or specific programs.

Passionate about ensuring that quality Pilates instruction is available to everyone Susan became an educator for the Polestar Pilates education program in 2017. She is passionate about getting Pilates recognised as a profession in Australia, which she feels starts with ensuring all Pilates teachers are properly qualified with comprehensive training to teach the method.

In 2017, Susan started to develop workshops for the Pilates community on using Pilates in rehabilitation but also in business development. Susan has now presented her workshops in Melbourne, Sydney and Brisbane, as well as at the PAA conference in Sydney in 2019.

Susan is currently completing training in Classical Pilates with The Movement Refinery Academy in Melbourne and a business course with the Owner Manager Program.